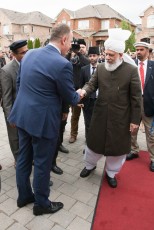 The Caliph Arrives in Canada

On October 3, 2016, His Holiness, Hazrat Mirza Masroor Ahmad set foot on Canadian soil, commencing his tour of the country. The Caliph, who resides in London, England, was welcomed at Toronto Pearson Airport by the National President of the Ahmadiyya Muslim Jama`at Canada, Mr. Lal Khan Malik, and various other officials who accompanied His Holiness to Baitul Islam Mosque – the headquarters of the Ahmadiyya Muslim Jama`at Canada.

As the Caliph arrived, slogans of joy, happiness and love rang out in unison across the neighbourhood surrounding Baitul Islam Mosque – known as Peace Village – home to thousands of Ahmadi Muslims.

His Holiness is one of the world’s leading Muslim figures promoting peace and interreligious harmony. Through his sermons, books and personal meetings, His Holiness continues to advocate the service of humanity. He has delivered keynote addresses at renowned global venues such as Capitol Hill, the UK House of Parliament and the European Parliament.

His Holiness leads a global campaign to convey the peaceful message of Islam through all forms of media. During his interviews, His Holiness addresses contemporary issues such as the refugee crisis in Europe, the rise of extremism and radicalization, and the increased tension between nations.

“The Caliph comes to Canada at a time when the world is drowning in fear, restlessness and disorder,” said National President of the Ahmadiyya Muslim Jama`at Canada, Mr. Lal Khan Malik. “The Caliph’s teachings of peace, mutual understanding and reconciliation between nations prove to be the key to resolving these global issues.”

On his tour of Canada, His Holiness aims to spread the true, peaceful teachings of Islam to all Canadians.