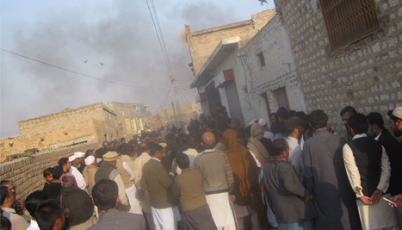 On December 12, 2016, while the Ahmadiyya Muslim Jama`at was holding a peaceful convention at its mosque, an armed mob consisting of more than 1,000 people attacked the mosque by opening fire, hurling rocks and invading the property. The angry mob began raising anti-Ahmadi slogans upon reaching the site and executing the planned attack. In an attempt to protect their lives, about 40 worshippers who were present in the mosque during the attack locked themselves inside. It is reported that one Ahmadi Muslim was killed as a result of the incident. After gaining control of the mosque, the mob burnt and damaged property inside.

Although police and army personnel were present during the incident, authorities stood by and watched idly as the mob viciously attacked the Ahmadi Muslim Mosque and its worshippers. Video footage and photographs from the incident show the attack taking place, while authorities complacently observed from the sidelines. Not a single arrest has been made nor has any official report been made public. The Government of Punjab tweeted, “as per the details, a misunderstanding developed between the two groups. Home Department is vigilantly following up the issue.” It later tweeted, “the police and authorities are making all out efforts to resolve the issue amicably.” In actuality, the planned attack on peaceful Ahmadi Muslims was not a misunderstanding of any sort. Furthermore, video footage of the incident indicates clearly that police and authorities made little to no effort to resolve the issue amicably.

In a petition filed with the local police department just a few weeks ago, a Canadian Pakistani clerics demanded the police to take “extreme measures” if the mosque was not “liberated” from minority Ahmadi Muslims. Due to constant threats in these past few weeks, the Ahmadiyya Muslim Jama`at issued a formal letter on December 5 to the District Coordination Officer, kindly requesting the provision of security at the Ahmadi Muslim Mosque. The letter stated that the life and property of Ahmadi Muslims were in danger and that a mob might "try to forcibly occupy Ahmadi's worship place." The letter also stated, "You are kindly requested to take adequate security measures to protect the life and properties and worship places of the Ahmadiyya Community.”

Members of the Ahmadiyya Muslim Jama`at are known throughout the world for their humanitarian initiatives, peaceful way of life and non-violent response to persecution. In Pakistan, Ahmadi Muslims are denied their fundamental human rights by the Government of Pakistan. In 1974, the Prime Minister of Pakistan, Zulfikar Ali Bhutto, introduced the Second Amendment in the Pakistan Constitution, specifically declaring Ahmadi Muslims as non-Muslims. In 1984, Prime Minister Zia-ul-Haq added Ordinance XX to the Constitution, making it a crime for Ahmadi Muslims to profess their faith or do anything Islamic. Since then, Ahmadi Muslims have been subject to state-sponsored hate, violence and persecution.

The Ahmadiyya Muslim Jama`at Canada prays for swift justice and the rapid recovery of the wounded.