In the Holy Qur’an Allah, the Almighty has told us that one of the purposes of creation of the sun and the moon is for determination of time:

He causes the break of day; and He made the night for rest and the sun and the moon for reckoning time. That is the decree of the Mighty, the Wise. (Al-An`am, 6:97)

Allah has also told us that the sun and moon run their course according to a fixed schedule:

The sun and the moon run their courses according to a fixed reckoning. (Al-Rahman, 55:6)

While solar calendars are quite accurate, lunar calendars differ due to various methods of calculations prevalent in various cultures and religions.
Muslims around the world become very concerned about lunar calendars couple of times every year to determine the month of Ramadhan and ‘Īd. Sometimes instead of “moon sighting” the exercise becomes “moon fighting” for some Muslims.

Conjunction means ‘birth of the New Moon’ which occurs when the Moon passes between the Earth and the Sun - specifically when the Earth-Sun-Moon plane is perpendicular to the plane of Earth's orbit around the sun. This moment is called ‘New Moon Birth’ or conjunction. No one can see this ‘New Moon’ even by most powerful telescopes.

Determination of 1st of Shawwāl

‘Īdul Fitr is celebrated on 1st of Shawwāl which is determined in following ways by different Muslim groups:

Many Muslim groups in North America use option Number 3, where they use the calculation of birth of the new moon and do not care whether the moon is actually visible or not.

Other groups, who are orthodox, do not believe in calculation and wait till the last day to try to see the moon with their eyes or rely on testimony of others witnessing the moon.

A small group follows ’Īd in Makkah and celebrate ’Īd on the same day as Makkah. Saudi Arabia has its unique method to determine 1st of Shawwāl which could be erroneous at times.

Determination of ‘Īdul Fitr in Year 2013

In 2013 depending on the method of determining 1st of Shawwāl, ‘Īd could have been celebrated on different days. Here is how:

Based on above options, ’Īd may be celebrated on following days:

Jamā’at Ahmadiyya follows option 4 in which we determine when the moon may be sightable if the conditions for viewing are perfect.

We celebrate ’Īd when the crescent of the moon can be seen. Even if it could only be seen under perfect condition, then ’Īd may be celebrated.

Based on the calculation method approved by Markaz in 2013, ‘Īdul Fitr was celebrated in North America on August 9.

In North America, as an administrative decision and approved by Markaz, we celebrate ’Īd on the same day. United States of America (USA) and Canada Jamā’ats work together to determine the start of ‘Īdain and Ramadhan and mutually determine after reviewing sightability of moon in various cities of North America covering from east coast to west coast.

This means that if the moon is visible anywhere in North America, then ’Īd is celebrated the next day both in USA and Canada.

In this reference, following important facts should be noted:

Based on the above facts, it was impossible to see the new moon in Canada or USA before August 8. Therefore, the ’Īd was on August 9. In fact, if we only consider Toronto or Canada, then ’Īd could have been on August 10 (instead of August 9 which was valid when considering North America as one region).
By using any scientific method of calculation and in the opinion of all the observatories, the sighting of new moon was not possible in North America before August 8.

Using only the age of the moon is not enough to determine if the moon will be visible or not. For example, in Toronto, on August 7, 2013, the age of the moon was about 26 hours and 42 minutes but the angle was zero degrees and the moonset was before sunset. In other words, the crescent was below the danjon line and was impossible to see. This was true for whole North America.

On August 8, 2013 in Toronto, the age of the moon was about 50 hours and 40 minutes and the angle was 5 degrees. Even though the age was over 50 hours, the moon could only be visible under absolutely perfect conditions.

One may debate which option, out of the 4, one should follow or why we do not take the conjunction of the new moon instead of sighting of the new moon for calculation. These are very good discussion items but are more of administrative and scholarly in nature. By the grace of Allah, we have the guidance of Khulafa that have guided us to follow sighting of new moon - as commanded by Allah and His Prophet Muhammadsa.

Criteria for Visibility of Crescent

The visibility of the crescent is dependent on the following conditions:

A simpler general criterion for sighting of moon is that for a given country or region, if the age of the moon is 20 hours, the moonset is after 40 minutes of sunset and the angulation is 10 degrees, then it is considered that the new moon would be visible. For most parts of the world, even if 2 out of the 3 criteria meet, then it is acceptable.

In North America, many Muslims now follow a modified calculation method. They have a very interesting formula in which they say that ‘Ittihadul-Mataali' (same horizon) should be adopted for the sake of global unity. To exercise this, they decided to choose Makkah for calculation by determining the new crescent moon above the horizon of Makkah when the sun sets in Makkah - whether it is visible or not is irrelevant. Some also have a modified version of this formula as well in which they use different calculation for Western Hemisphere and Eastern Hemisphere.

In the Holy Qur`an, Allah, the Almighty says:

They ask thee about the new moons. Say, ‘They are means for measuring time for the general good of mankind and for the Pilgrimage. (Al-Baqarah, 2:190)

It is the sighting of this crescent that marks the start of a new month. Therefore, even though a moon may be born on one day, it may not been seen until the next day. Furthermore, if a new moon is born less than 15 hours before sunset on day 1; it will not been seen until sunset of day 2; and when it is finally seen it is 15+24=39 hours old and will look very thick. This does NOT mean that this is a second day or third day moon. A first day crescent-moon can be very thin in some locations and it can also be thick in other locations because of time difference.

The length of the lunar month changes every month (considering the time from new moon to new moon). The length could range from approximately 29 days 5 hours to 29 days 20 hours, with an average cycle of 29 days 12 hours 44 minutes and 3 seconds.

It should be noted that the fourteenth of an Islamic lunar month does not always falls on a full moon day. Full Moon can occur on 13 or 14 or 15 of the month. This is because the full moon occurs at one specific moment and at every moment, there are two dates in the world. Also, the sighting of the moon determines the beginning of the month not the moon birth.

Consecutive Months of 29 days or 30 Days

Hazrat Ibn Umarra relates that the Holy Prophet Muhammadsa  said that when you see the new moon (of Shawwāl) then stop fasting (and in case) if you do not see the new moon (due to cloud, etc.) then complete 30 days (of fasting). (Bukhari).

This Hadith clearly states that when in doubt one should complete 30 days.

Sometimes, a Muslim group makes the mistake on start of Ramadhan, which they cannot fix later and they cannot have Ramadhan of 31 days. So, now they get caught in the trap and have no choice but to make the wrong decision of celebrating ‘Īd a day earlier. Also, some Non-Ahmadi Muslims do not like ’Īd on Friday because they consider it a bad omen!
For us it is ‘Īdain (two ’Īds) if it is on Friday.

Islamic scholars and various schools of thoughts have differed on regionalizing the sighting of moon and determination of the physical jurisdiction for the sighting. Difference of opinion exists in Muslim Ummah and these are more of an administrative and scholarly discussion rather than scientific issue.

There are indeed some Ahadith that does provide some guidance on this issue. By the grace of Allah, Islam offers flexibility in every matter. Therefore, whatever decision is made or whatever practice is followed based on those Ahadith, would not be wrong. For Ahmadi Muslims, it is much easier and simpler, because the system of Jamā’at is there to assist and guide us through Imam of the time. The blessing lies in following this guidance.

While Ittihadul-Matali' position was mainly meant for short distances considering Matla' (horizon) remains the same, scholars have interpreted this as one city, one country or even one larger region under the same administration or governance.

According to Hanafi school of thought, the whole country can celebrate ‘Īd if the moon is sighted in any part of the country.

Imam Shaafi also agrees with the above.

However, Imam Tirmizi differs and quotes the following:

Hazrat Ibn Abbasra in Medinah required Hazrat Kuraibra to fast for the 31 days, because Kuraibra started his Ramadhan in Dimashq, one day earlier than Medinah, and Ibn Abbasra did not accept the argument of 30 days completed.

Some Muslim scholars have adopted the position that for sighting of moon they would consider half of the hemisphere. There are other scholars who say that the whole world should follow the sighting of moon in Makkah.

In USA and Canada, due to close proximity of two neighbouring countries, it was observed that most of the time both countries share the same sightability of the moon (considering each country as one administrative region).

For South America, which is below equator, the sightability is not always the same as North America.

Allah created the globe and its rotation (with time differences). The horizon is different for far locations. Principles of Shari'ah are not changed because of scientific inventions. Invention of watches did not change the prayer times that were in practice before watches.

When the moon is sighted in a place on earth, right at that moment there are two days and dates prevailing all over the globe. Some places have already started their next day. Those places cannot start the month at that time. They have to wait for the next sunset time to start new month, and hence their month will not start on the same day as the place where the moon was sighted.

Suppose the moon is only possible to be seen in Hawaii and nowhere in the world. The time of starting Islamic month will be after sunset in Hawaii (around 6:00 p.m). At that time in Tokyo (with 19 hours difference), the time will be 1:00pm of the next day. If this was month of Ramadan, this is way past Suhoor time in Tokyo. They cannot start fasting before the sighting. As long as actual sighting is required, by the time the moon is actually seen in Hawaii, it will be hard for the people of East coast of Canada to wait past 3:00 or 4:00am for the confirmed news of sighting.

Just like prayer timings are different in different locations, start of lunar month is also different.

However, if for the unity of Muslims, scholars decide some acceptable convention, then all Muslim Ummah may start the Islamic month on the same day with adjustments to time differences.

And Allah increases in guidance those who follow guidance. And the good works that endure are best in sight of thy Lord as reward, and best as resort. (Maryam, 19:77)

May Allah continue to shower the blessings of Khilafat – the source of guidance for present times, on us. Ameen! 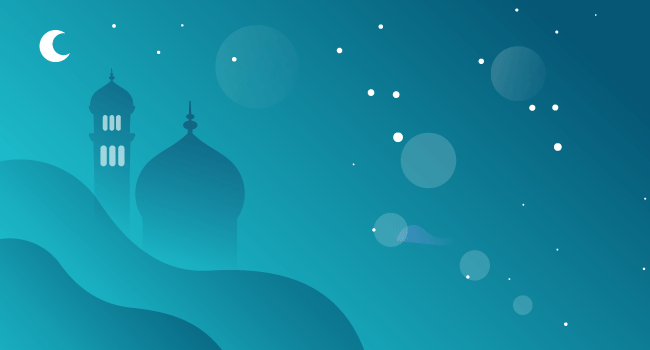