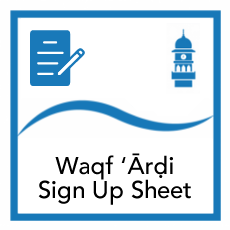 The Waqf ‘Ārḍi Scheme was initiated by Hazrat Khalīfatul-Masīh IIIrh in 1966. Its objective was to prepare every Ahmadī member as a Murabbī [Missionary] and to facilitate religious training of all Ahmadīs. Under this scheme, groups of Wāqifin are sent to outside Jamā‘ats for specified periods of time at their own expenses.

The greatest purpose of this scheme is that Ahmadī members can offer their services on a temporary basis to organize special classes in various Jamā‘ats for learning and teaching of the Holy Qur’ān. Another purpose of the Waqf ‘Ārḍi Scheme is that the wāqifin can urge Ahmadī members to settle petty differences and advance in the direction of higher goals of this great scheme.

BENEFITS OF THE SCHEME

The Waqf ‘Ārḍi Scheme would not only play a great role in spiritual training of others, but it would equally benefit the wāqifin themselves. Before embarking on this mission, the wāqifin would be encouraged to overcome their shortcomings by focusing on prayers and gaining more religious knowledge through studies. This way, they would become excellent role models for others.

All Missionaries and Office Bearers should urge every Ahmadī (man or woman) to participate in this great scheme, which undoubtedly demands great sacrifice. However, one should never forget that without sacrifices, one cannot win the pleasure of Allah.

Click here to fill out the Waqf ‘Ārḍi application form

Click here to view the guidelines for Virtual Waqf ‘Ārḍi